The recurrent labor-representative mentions of “taxing the rich” as a solution to state and municipal budget difficulties at last week’s Senate Finance hearing adjusted the focus even more sharply on their strategy for managing Rhode Island’s decline. One early indication was the high concentration of labor unions among the “coalition members” involved with Rhode Islanders for Tax Equity, a group formed to lobby for one of the tax-the-rich schemes currently lying in wait in the General Assembly.

Also making their way through the legislature are bills related to the introduction of casino gaming at Twin River and Newport Grand video slot parlors.  Yesterday, according to Providence Journal reporter Paul Grimaldi, a rally at Waterplace Park supporting the move broke down as follows:

A smattering of Rhode Island business leaders joined hundreds of workers, many of whose income depends on Twin River’s financial health.

“Workers” translates “union,” as evidenced by the photo caption accompanying the story.  On like message, Twin River Chairman John Taylor presents casino gaming to WPRO as a job-creation initiative.

Following the legislation, however, is apt to give the impression that goal number 1 is to preserve the state’s gambling revenue.  After all, the proposal is not just for casinos, but for government run casinos contributing around 58% of their revenue to the state government’s coffers (61% of slot revenue and 35% of table game revenue).  Meanwhile, a strong case can be made that taxing the rich and introducing casinos should be on opposite ends of a job-creation strategy.

Defenders of the governmental status quo in Rhode Island have been very lucky, over the last decade, with one-time windfalls and accounting gimmicks filling annual deficits.  But even with income taxes on PowerBall winnings offering small boosts, luck will run out.  And one major hit to the government’s budget is going to come with the introduction of casinos in Massachusetts.

Studying the question of table games at Twin River, Christiansen Capital Advisors (CCA) projects that the state would collect $365.7 million in gambling revenue in 2017 if nothing were to change in Rhode Island or Masssachusetts on the casino front.  With casinos to the north, CCA puts the likely state gambling revenue at $226.2 million, a difference of $139.5 million (38%).  Table games at Twin River would preserve an additional $16 million, for $242.2 total state revenue.  (The CCA study did not assess table games at Newport Grand, but they might add another $5 million or so to the total.) 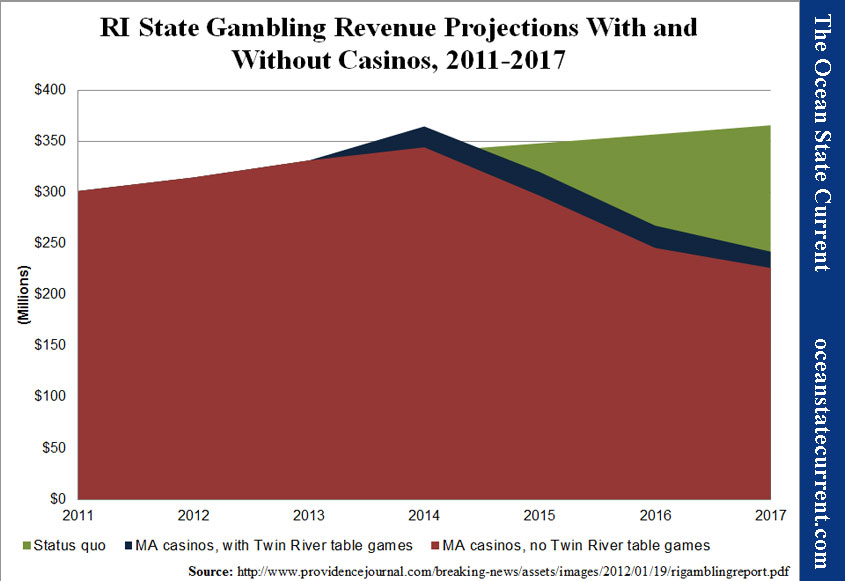 If we assume another $5 million from Newport Grand table games, Massachusetts casinos will still remove $118.5 million from the State of Rhode Island’s public spending money.  That, as it happens, is astonishingly close to the $118 million that “tax the rich” advocates expect their legislation to raise each year.  (Of course, that number should be adjusted downward to account for deleterious effects on the population and economy.)

In short, the two revenue policies that the unions are backing cobble together preservation of state spending money (with roughly 4% annual increases) in the face of a known threat.  Whether the effects on the economy and on Rhode Island’s civic society are worse than the medicine is what the public debate ought to address between now and November.