An exchange in the comment section of the latest Rhody Reporter leads to an important point.  Rhett Hardwick commented:

While somewhat confused by Lou’s post, this does come to mind. It occurs to me that the famous “Woodstock” occurred during a pandemic (Hong Kong Flu?). I do not recall any reports of an upsurge in illness.

Susan Craddock, a professor at the Institute for Global Studies of the University of Minnesota told the WSJ that mortality rates for the 1968 pandemic were much lower than current mortality rates from COVID-19.

As we all know from following the data of this pandemic so closely, it’s mainly a killer of the elderly.  Kids and young adults are hardly affected, while the rate of complications and deaths increases dramatically as people age past 65.  This raises the question of how the United States of 1968 might have differed from the United States of 2020.

As the following chart shows, while there is about the same number of bounce-back-from-illness children now as there were in 1968, there are nearly three times as many people in the elderly high-risk category.  If we’re trying to compare the deadliness of pandemics, we have to adjust for this difference. 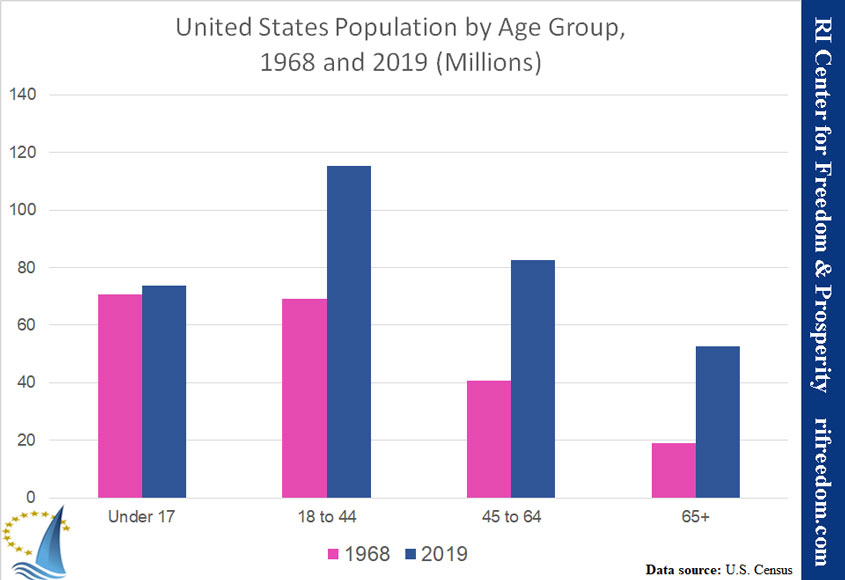 But we should take the analysis a step further.  In 1968, Americans’ life expectancy at birth was 70.2 years.  (Interestingly, that represented a drop from the prior year, which was explained by the flu epidemic we’re talking about.)  By 2019, that had risen to almost 79 years.

But even without such adjustments, one would expect COVID-19 to be multiples more deadly than 1968’s H3N2 just because three times as many people are in the at-risk category and they make up almost twice the percentage of the population they did, then.  Moreover, our ability to keep people alive, these days, likely means that the elderly population is more vulnerable as a group than fifty years ago.

One can’t escape the observation that we’re constraining the education of our students and depriving young adults of many of the cherished experiences of youth simply because people are alive now who would have died of other causes had they been a couple generations earlier, and because they’re still alive, they have a higher risk of death from a relatively non-deadly virus.