This is one of those investigations for which curiosity took hold and insisted that it be worked through.  Each month, I’ve been posting a chart of every state’s distance from its peak employment level prior to the recession, according to data from the U.S. Bureau of Labor Statistics.

Color-coding that chart for various policies produces some interesting results.  For example, seven of the ten states that currently exceed their peaks are right-to-work states; if you take out the two states that became right-to-work just last year, only four of the bottom ten are in that category.  States with no income tax tend to be doing a little better than states with no sales tax, although there are relatively few of either.  Same-sex marriage doesn’t look like it has much effect; none of the states with it are either significantly above their peaks or at the bottom of the chart.

But what about party?  Of those (relatively) healthy ten states at the top, six have legislatures completely controlled by Republicans, one more was Republican until the last election (Minnesota), one has a split chamber, meaning that the House and Senate are controlled by different parties (Virginia), and one has a unicameral, non-partisan legislature (Nebraska). That leaves Maryland as the lone state above its peak employment that was completely controlled by Democrats prior to the 2012 elections.

Of course, Democrats only control three of the bottom-ten states’ legislatures, so the next question is what the chart has looked like as states have changed hands from election to election.  Obviously, the governor matters, too, but major policy shifts have to come from the legislature, as illustrated when Indiana and Michigan turned right-to-work.

So here is the state of play in November 2008, just after the election.  Red markers are states with fully Republican legislatures; blue are for Democrats; orange is split; and purple is Nebraska.  The results (and the color selections ) come from maps available through the National Conference of State Legislatures’ StateVote project.

(Perhaps the most helpful way to compare these charts is to right click and open them in different windows or tabs.  That will allow readers to toggle between them and watch the markers move.) Three observations of note are that (1) the states are pretty much clustered between 95 and 100% of peak employment, with (2) one of the exceptions being Rhode Island already an outlier in the bottom three, and (3) the brunt of the recession hadn’t hit yet.  To see how the states spread apart during the recession and its aftermath, we advance the clock to November 2010, with the colors being legislative control just before the election. The Republican-controlled states still span the scatterplot, but they’ve got a majority (six) of the top 10 and only three of the bottom 10.  The Democrats hold the middle cluster, while split legislatures appear to be weighted to the downside.  But watch what happens when the colors change to reflect the results of the election that year. Many states that were Democrat or split flipped to Republican control, and they were mostly in the bottom half of the ranking. Iowa and Colorado went from Democrat to split.  So what if we advance another two years? 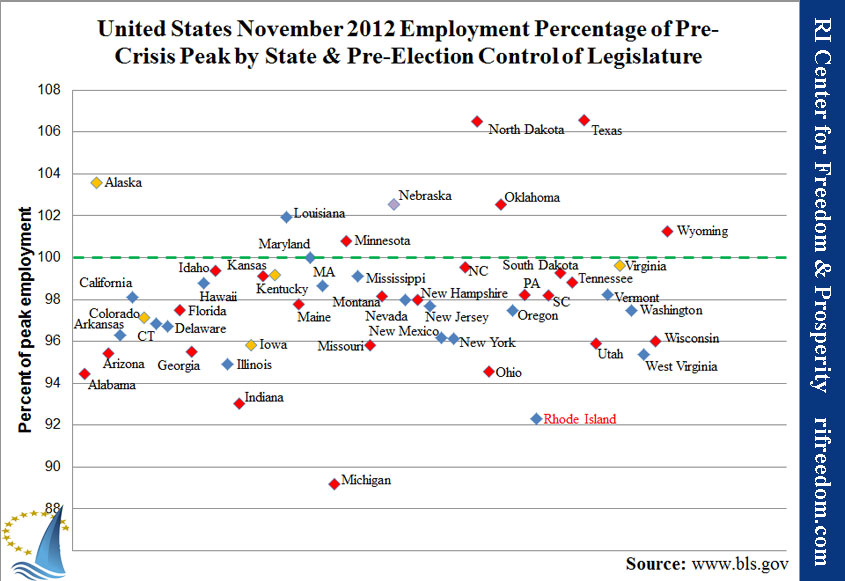 There is clearly a general upward shift, but Republican states continued to dominate the top 10 and, in general, improved at a greater rate than Democrat-controlled states.  In the space since then, the trends give the impression that the country is either hovering in anticipation or cresting the top of the new normal.  Some states went up; some went down.

It’s interesting to note that Arkansas, which had hovered around the 96% line and is now in the bottom 10, around 95%, switched to Republican last November. New York has also hovered around 96%, and moved to the split column in November.

For Rhode Islanders, the primary takeaway is — as it all too  usually is — the lack of substantive change.  With a huge burden of work, it would be possible to make a chart that shows which states have reorganized their economic development agencies or decided to permit employers to issue paychecks less frequently than weekly, but nobody really, honestly, truly expects such things to have substantial effects on the employment situation, do they?