There isn’t a whole lot in the October employment results for Rhode Island to brighten the holiday weekend.  The state’s employment rate stayed the same as in September, at 4.2%, but the reason was that the 708-person loss in employment was more than offset by a 724 reduction in the number of Rhode Islanders looking for work.  As our common refrain goes:  Maintaining a low unemployment rate by pushing people out of the market isn’t a sign of health.

Once again, the hope of someday reaching the same level of employment as before the Great Recession drifted further out of reach. For a sense of how the situation would differ if those Rhode Islanders hadn’t stopped their job searches, consider that the unemployment rate would have increased from 7.4% to 7.5% if the labor force had held constant since January 2007. For some consolation (if anybody would see it as such), we can note that both Massachusetts and Connecticut have seen declines, as well.  However, with the states surrounding them seeing softening employment, Rhode Islanders have even less opportunity than if those states were still booming: Putting the states in a national context shows how Rhode Island has less room for error, given that its poor employment showing for October brought the Ocean State toward the back of the pack when it comes to employment regained since the recession. Perhaps most disconcerting is the monthly chart showing employment versus RI-based jobs.  The darker area is a repeat of the employment line shown above, which means that it is based on less-reliable survey data and would include anybody who is self employed, is a contractor, or works out of state.  The lighter area derives from actual tax data and represents people who work for somebody else within the state of Rhode Island.

Since the nadir of the recession, jobs in the state have at least maintained a slow, continual growth.  As we approach the end of 2017, however, we also face the prospect of a year with almost no increase in jobs. 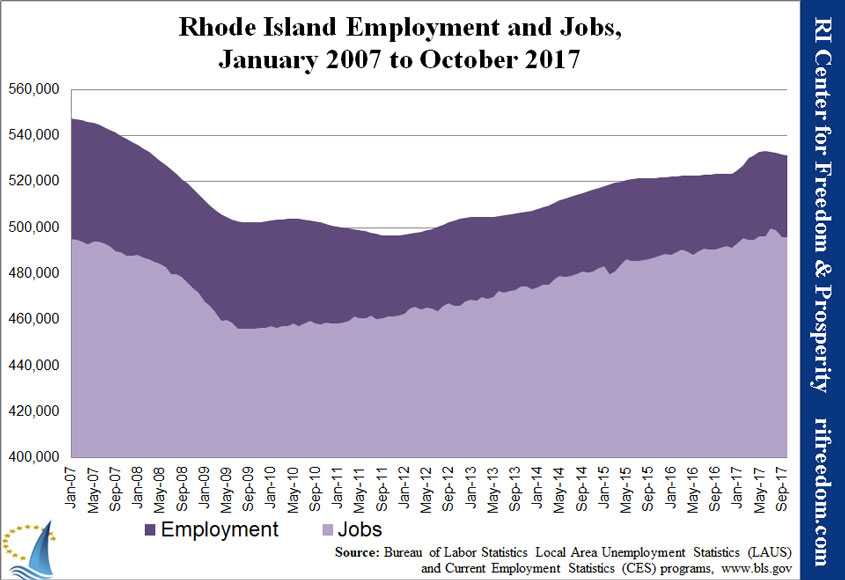 Given all of the above, it isn’t surprising that Rhode Island didn’t budget from its status as last in New England and 49th in the country on the RI Center for Freedom & Prosperity’s Jobs & Opportunity Index (JOI).  It would be possible to achieve improvement even with shrinking employment numbers, if income were rising, taxes were dropping, and reliance on welfare programs were disappearing (just as the labor force has been disappearing), but the current political atmosphere in the state doesn’t make such an outcome likely.