The September employment and jobs estimates from the federal Bureau of Labor Statistics (BLS) brought glum news for Rhode Island.  Employment fell by 1,271, from revised estimates for August, and labor force by 732.  The only reason the unemployment rate “improved” was that more people stopped looking for work than lost their jobs.

Meanwhile, a loss of 3,700 jobs based in the the state erased almost all of this year’s gains, bringing Rhode Island employers back below where they were at beginning of 2007.

In fairness, the employment and labor force numbers (as distinct from the number of jobs in the state) are not entirely a surprise.  Every year, Rhode Island sees dramatic increases until the last few months of the year, and then the BLS revises those numbers down and smooths the curve the following January.  The follow chart shows the process beginning. 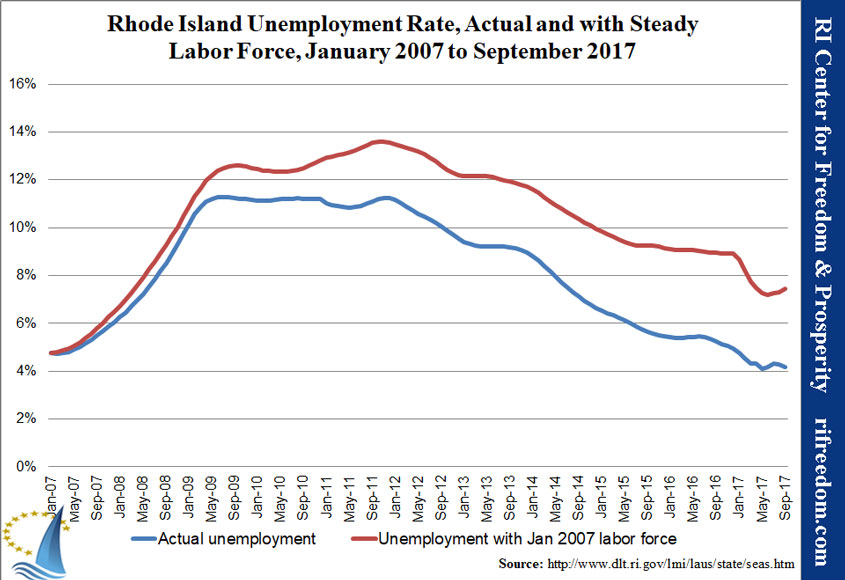 Given how much Rhode Islanders rely on their neighboring states of Connecticut and Massachusetts, including for employment opportunities, it isn’t really a bright side to note that we aren’t alone in our employment drops, although the Ocean State’s neighbors obviously have made up much more ground since the recession. Putting Rhode Island’s position relative to its pre-recession peak in comparison with the other 49 states shows how long-term the Ocean State has been struggling.  This month, Rhode Island slipped back to a tie with its New England sister, Vermont. 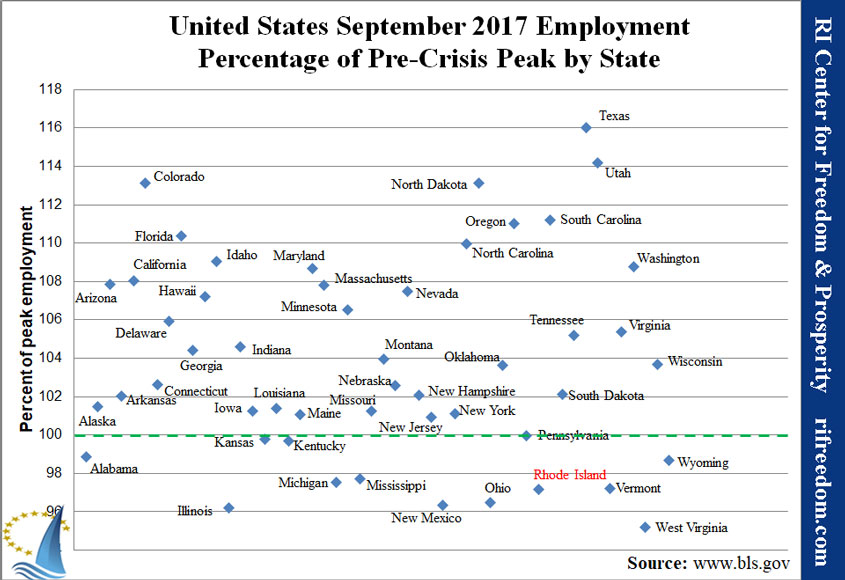 The final chart for this month illustrates the worrying news mentioned at the top of this post.  While the dark area is just a repeat of the employment line shown above, the light area shows the number of jobs based in Rhode Island.  Based on tax information, this dataset is more reliable than the employment data, which comes from a survey.  The long-term trend in Rhode Island jobs has been of very slow (sub-inflation) growth.  The big drop in September, however, raises the prospect that the slow-growth trend is coming to an end, and not by becoming fast-growth.

At least until next month, it can no longer be said that Rhode Island has gained back all of its lost jobs.