It isn’t surprising that Bristol and Warren differ from each other and their Bristol County neighbor, Barrington, when it comes to population and employment.  But some of the differences might not be expected. Of course, the problem with having more people, with a growing percentage of them desiring to work, is that it translates into higher unemployment numbers.  Over that decade, the 459 residents who constituted a 3.8% unemployment rate in 2000 increased to 1,335, for 10.4%, by 2010 (not seasonally adjusted).  In March 2012, the numbers stood at 1,322 and 10.6%, with both the labor force and the number of employed residents having declined.

In the following graph, the distance between the two lines is the unemployment number. Despite the downswing, the number of employed Bristol residents is only about three-and-one-half percent below its average for the past twenty-two years, and its unemployment rate still beats the state’s 11.8%.

Warren is another story.  Not only is the town’s unemployment rate currently 12.1% (not seasonally adjusted), but it has declined by every measure:  population was down 6.6% in 2010, compared with 2000; labor force was down 3.0%; and the number of employed residents was down 10.0%. Because the drop in population was greater than the drop in the number of residents looking for work, an even greater portion of the population is seeking jobs and unable to find them.  That could mean, for example, that struggling families are trying to supplement their income with additional workers and proving unable to do so.

In the twenty-two years for which the RI Dept. of Labor and Training has data, the number of employed Warren residents has never been lower.  The only reason March’s total labor force number wasn’t the lowest on record is that it’s up slightly from January. 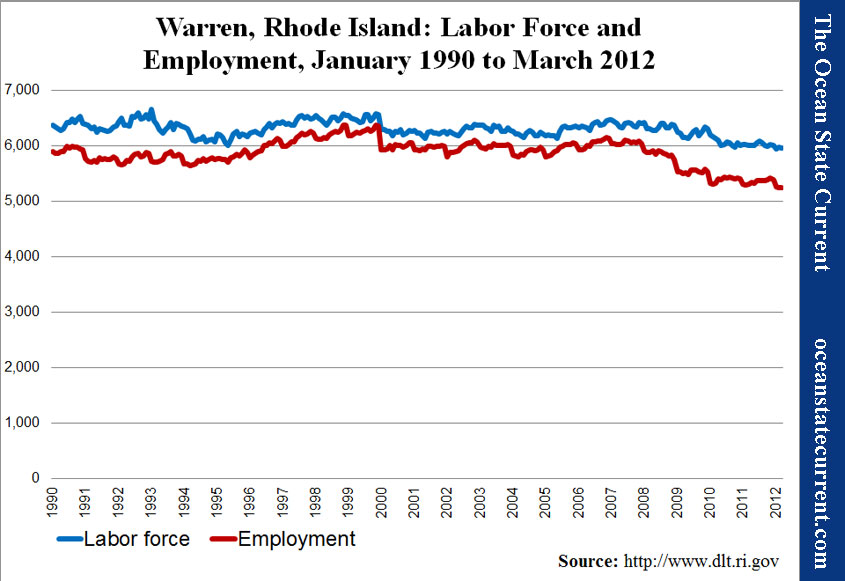 The peculiarity, in Warren, is that the labor force increased in February from January even as the number of employed residents decreased.  In other circumstances, that might be a positive sign, meaning that more residents are optimistic enough to renew their searches for work.  But with the towns on either side of Warren heading in the other direction, it’s more likely a statistical anomaly or evidence of desperation.