With the last employment report from the Bureau of Labor Statistics (BLS) to be released during 2017 now published, Rhode Island stands in a holding pattern awaiting what is likely to be another substantial downward revision early in the next year.  For now, the official unemployment rate has ticked up to 4.3%, which still looks misleadingly positive.  Were it not for an evaporating labor force, the picture would not look as sunny.

As the first chart shows, both the state’s labor force and its number of residents who say that they are employed slipped slightly in November.  If the experience of the past few years is any guide, the BLS will release December numbers a little lower, next month, and then revise five years of numbers downward, at which point both lines will drop and be smoothed out. Once again, Rhode Islanders can take some little solace in the fact that Massachusetts and Connecticut are both seeing drops in employment and labor force.  However, their dips started from such a higher point that catching up isn’t likely to happen any time soon for the Ocean State. And, as usual, that silver lining is quickly undone by a national look at states’ distance from their pre-recession peak employment.  Rhode Island is stuck in a cluster of states that haven’t managed to fully recover yet, even after all these years. The reason for this lackluster performance is that Rhode Island’s growth trends have been so painfully slow.  Treating the past year’s employment bubble as a question mark that’s likely to disappear with the revision, local employment has almost not budged since early summer 2015.  Meanwhile, the number of jobs based in the state has crawled up at a decelerating rate. 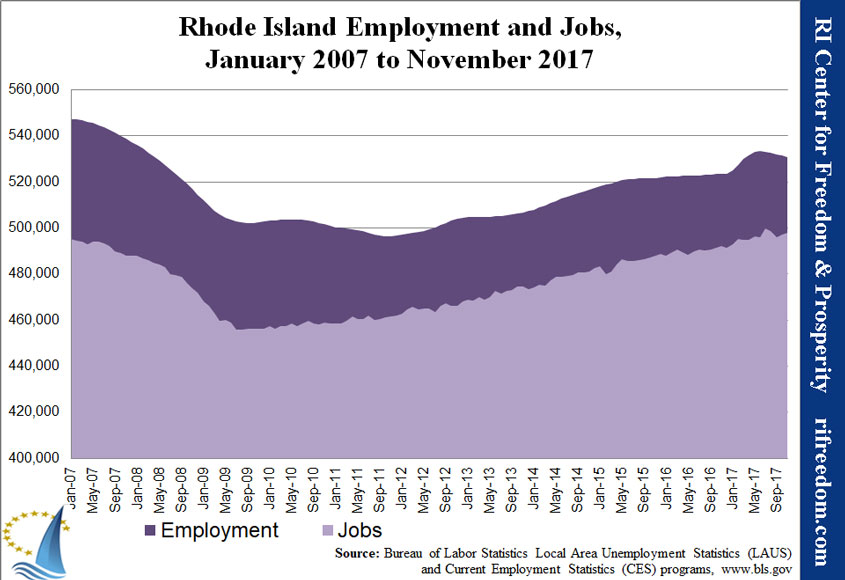 If misery loves company, then Rhode Islanders’ hearts might flutter to observe that New Hampshire has lost its 1st place ranking on the RI Center for Freedom & Prosperity’s Jobs & Opportunity Index (JOI), although the distance from 2nd place to Rhode Island’s improved 47th place is huge.  Connecticut provides something more like company, this month, by falling into the bottom 10 of states, at 41st.