4:30 p.m.
The Senate floor session began a bit late, today, because President Teresa Paiva Weed held a quick press conference to announce that Senator Frank Ciccone would be stepping down from a couple of committee memberships (government oversight being one of which he’s chair).  She wasn’t very descriptive about the reason, but it clearly relates to his behavior when Sen. Majority Leader Dominick Ruggerio was pulled over for driving under the influence.

Of course, all of the hip twitter journalists already have the story up, so in a matter of minutes, it’s no longer breaking news.

4:55 p.m.
Now I’m in room 310. Thankfully, the heat is not on this time, and it’s actually pleasant. The Senate chambers were warm, though, and I can see why they rush to get out of here before the summer. I will say, though, having watched my first Senate floor session, that it was surprisingly docile. No discussion. No nothin’.

Seems all the action happens in committees and (more) behind the scenes.

4:58 p.m.
The first bill up is S2701, having to do with medical examinations for mixed martial arts fighters.

5:00 p.m.
Louis DeQuattro from the Dept. of Business Regulation said the bill updates the laws a bit, brings it into line with boxing. 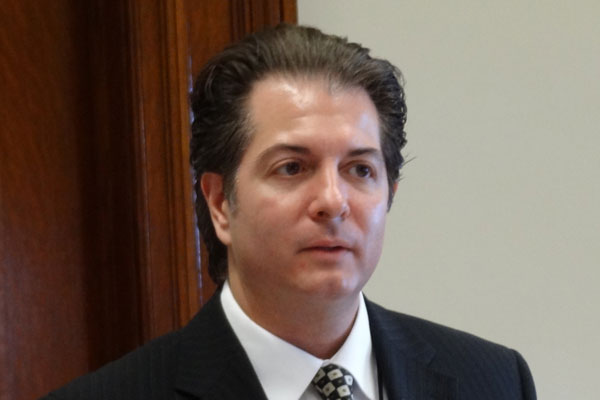 Tom Mather, a professor from URI, is going over the reason that tick bites are important. As illustration, he gave all of the Senators a bag with a poppy seed bagel to illustrate the size of a tick. 1 out of 5 ticks carries a disease, and they’ll be out in about a month. The professor is explaining the costs involved with tick-borne diseases.

“There are two questions before you: Can we actually save money through an aggressive health-promotion program?”

5:09 p.m.
Mather argued that the government spends a great deal of money on mosquito-borne diseases like EEE, but the fatalities from that are dwarfed by tick-related deaths.

He says there are thousands and thousands of adult deer ticks at rest stops, back yards, etc., with 1 of 2 carrying lyme. Sen. David Bates said that he’s willing to look for funding, but he doesn’t want to set the precedent of giving out scratch tickets, because every group would want one.

Sen. Felag pointed out that this would be an annual expense. (Sounds like it’s $200,000 off the top of revenue.)

Mather argues that a dedicated ticket might bring new ticket buyers who support the cause.

5:16 p.m.
Felag suggested that Mather go to Blue Cross. Mather said he tried that, but he doesn’t believe that the insurer understands the costs associated with ticks.

Sen. Edward O’Neill is now up with a bill related to a sunset of allocation lottery revenue. Held for further study because there’s a date discrepancy. 5:19 p.m.
And now on to S2703, the attorney general’s legislation related to gambling control in RI. Special Assistant to the Attorney General Joee Lindbeck is introducing the bill. I wrote about some of the problems with the bill, yesterday. Although I spoke with Ms. Lindbeck related to that article, but she made no mention of the issues. (Not that one would expect her to do so.) 5:22 p.m.
Bates asks whether the state police has an officer in charge of gambling, and asked whether a whole new unit is necessary. Lindbeck says yes.

Felag asked about the authority that the Dept. of Business Regulation (DBR) has over horse racing, noting that there is none. Lindbeck said they want to be prepared if it comes back.

Sen. Paul Jabour asked whether horse racing has to be approved by voters. Lindbeck said no, because it’s in the law. Felag notes his surprise (which I second) that nobody from DBR is in the room to offer an opinion.

That’s the one that is problematic, in my view, because that’s where all the language about “conflict of interest” for Lotteries Division employees resided, and the language related to any casino operator, not (as Lindbeck made it sound) with a contract that never came to be.

5:28 p.m.
Lindbeck said they want to have regulations in place before the voters vote this autumn.

5:29 p.m.
John Mongelli, representing the RI Council on Problem Gambling, makes the point (which I noted yesterday) is that “a comprehensive problem gambling program” that currently exists in the law would disappear. 5:30 p.m.
Felag asked if that would be a separate bill. Mongelli stressed that the AG is taking it out.

Lindbeck interjected that the AG has no problem if the legislators want to put it in.

Bates asks if the existing facilities have problem gambling programs. He seems very agitated that Mongelli would claim that there’s no policy. Mongelli suggested that the programs aren’t very comprehensive or even written down and accessible to the public.

Mongelli stresses that his group wants there to be fines. Felag asked if Mongelli has spoken with the AG. Mongelli says he has in the past, but found the office to be stand-offish.

5:36 p.m.
Mongelli is describing the various factors that ought to be in place for problem gambling, such as self exclusion. He notes, particularly, that the check cashing businesses inside the facilities should be tied in. If they discover that a person is self-excluded from gambling, they should know what to do, but he’s gone in and told them that as he’s cashed checks and had no problem.

5:38 p.m.
Mongelli further mentions that Massachusetts has a requirement that gambling facilities have licensed therapists onsite to help problem gamblers.

5:39 p.m.
He’s also pointing out problems with transparency. The Lotteries division, he says, has a specific exemption from open records.

Sen. Bates says that the Lottery division is now under the Dept. of Revenue and is therefore covered. Mongelli says he’ll forward the information to him.

5:41 p.m.
Felag is encouraging Mongelli to sit down with the AG’s office so that they could work together to figure out what should be a law and what should be a rule or regulation. Mongelli wants it all in the law.

“I’m sure they will have no problem putting it in,” says Felag.

5:42 p.m.
ACLU Steven Brown wanted to testify on this, but he’s not present. So, with nobody left to testify, the committee held it for further study.

5:44 p.m.
They’re on to 2737. It would “provide that additional state revenues gained from the expansion of gambling would be directed and allocated to support elementary and secondary education.”

Diane McLaughlin, of the Ocean State Tea Party in Action is testifying against. “Why should a segment of government receive a designated windfall every year.” Additional revenue should go to all people, not just a special interest “like the teachers union.” (There’s a lot of unanimity in his committee.)

5:49 p.m.
It doesn’t look like any of the members took their poppy seed bagels.