Governor Raimondo announced that she was going to give Rhode Islanders more transparency into the data that she’s using to make decisions about the extent of our freedom during the COVID-19 wave, and even the RI Center for Freedom & Prosperity commended the intention.  What Rhode Islanders actually got, however, wasn’t much transparency, but rather, an incomplete chart of a single metric without any description of the methodology. 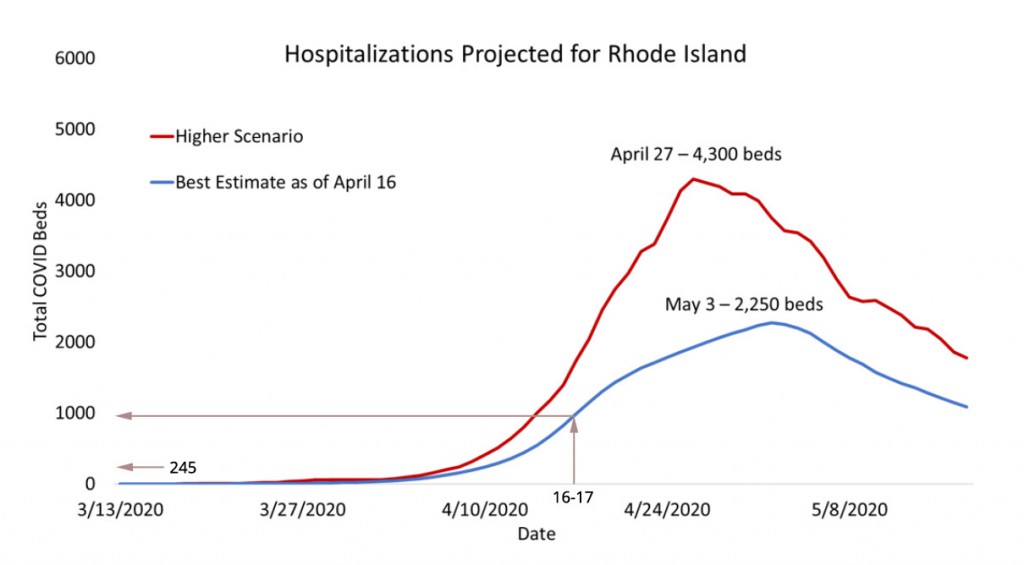 What’s conspicuously missing from this chart is a “lower scenario.”  See, for example, the IHME model for Rhode Island, which has a worst-case scenario of 4,386 hospital beds needed on May 6, a “projection” of 942 on May 2, and a best-case scenario that has us already beginning to see a reduction.

Rhode Islanders shouldn’t hope for that outcome, but given how high the IHME’s projections have proven so far versus reality and how much higher the governor’s estimates apparently are than theirs, we should expect many fewer hospitalizations than she’s saying.  It’s difficult not to conclude that she’s painting a bleak picture so as to mislead Rhode Islanders into better compliance with her directives.  That’s especially true if you notice that the governor’s “best estimate” line appears to show nearly 1,000 people in the hospital today, when the actual number is 245.

As I’ve been saying, we are adults and deserve accurate information.  We are not children who need an elected mother to coax us with phrases like, “I need you to be brave.”

Again, rates of growth have been slowing.  Seventeen days ago, hospitalizations were increasing around 25% every day.  That’s down to about 7% now.  At the same time, the increase of total cases has been slowing, as has the percentage of all cases who are going to the hospital.

The question the governor apparently didn’t answer (and that apparently nobody asked) is why we should expect these trends to reverse such that the number of hospitalizations will be nine times higher in 17 days than it is right now.  That would be an average of 15% increase every day.  Why should we expect the rate of hospitalization to accelerate like that?

Maybe there’s some data out there that would give us reason to expect such an outcome, but we should know what it is, and the people who gave Raimondo her chart should be able to explain it to her.