On Friday, hundreds of thousands of Americans including many Rhode Islanders, rallied in Washington, D.C., for the March for Life as Progressives push for a dramatic abortion expansion in the Ocean State. The 46th annual March for Life showcased a movement to protect the unborn human being led by young people, with recent polling from the Institute for Pro-Life Advancement showing seven of 10 Millennials support limits on abortion.

“Forty-six years ago our country made a terrible mistake, and every year since Americans have come together to declare that the unborn are not forgotten and we will never stop fighting for their right to life,” said Tyler Rowley, Executive Director of the Servants of Christ for Life and Millennial activist. “Our nation was founded upon the principle that every human being possesses the right to life, so we continue to plead with our countrymen and elected officials to logically conclude what any reasonable person would conclude — that unborn human beings should be granted that basic human right.” 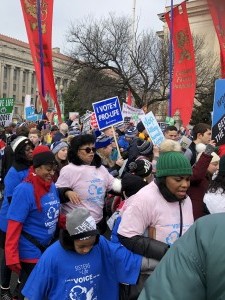 Rejecting that fundamental principle, the “Reproductive Healthcare Act” (RHCA), with lead sponsorship by Progressive Rep. Edith Ajello and Progressive Sen. Gayle Goldin in the Rhode Island General Assembly, would expand on-demand abortion in Rhode Island including the most radical and gruesome procedures.

The RHCA would remove from Rhode Island law the ban on partial-birth abortion.

Also, the bills would remove from law additional penalties for the killing of an unborn child as a result of to injury to the mother, would stop the notification of spouses of women seeking abortions, and would expand the number of abortions paid for by taxpayers and insurance providers. Following the March for Life, the America’s Future Foundation (AFF), which has a Rhode Island chapter led by this reporter, held a networking event in D.C. with well over 60 young professionals in attendance to discuss life and liberty. AFF’s mission is to recruit and cultivate young professionals to become lifelong and effective advocates for liberty. The next day, Executive Director of AFF Cindy Cerquitella spoke at the March for ALL Women rally, a counter movement to the divisiveness of the Progressive-led so-called “Women’s March.”

Grant Van Eck, former Chapter Leader of AFF-RI, Past Grand Knight of Our Lady of Fatima Council #4331, a current Culture of Life Director for the Knights of Columbus, and a Millennial said, “There is power in science; life begins at conception. The younger generation knows the truth and is leading this movement to give equal rights to babies in the womb. This is the civil rights issue of our generation. It was so inspiring to joyfully march for those who can’t defend themselves in solidarity with people from every background, religion, and community celebrating a deep love for life.”

In contrast with these life-affirming activities, here are other legislators who have signed on to the radical pro-abortion legislation in Rhode Island:

Political Monday with John DePetro: Ownership of the Government