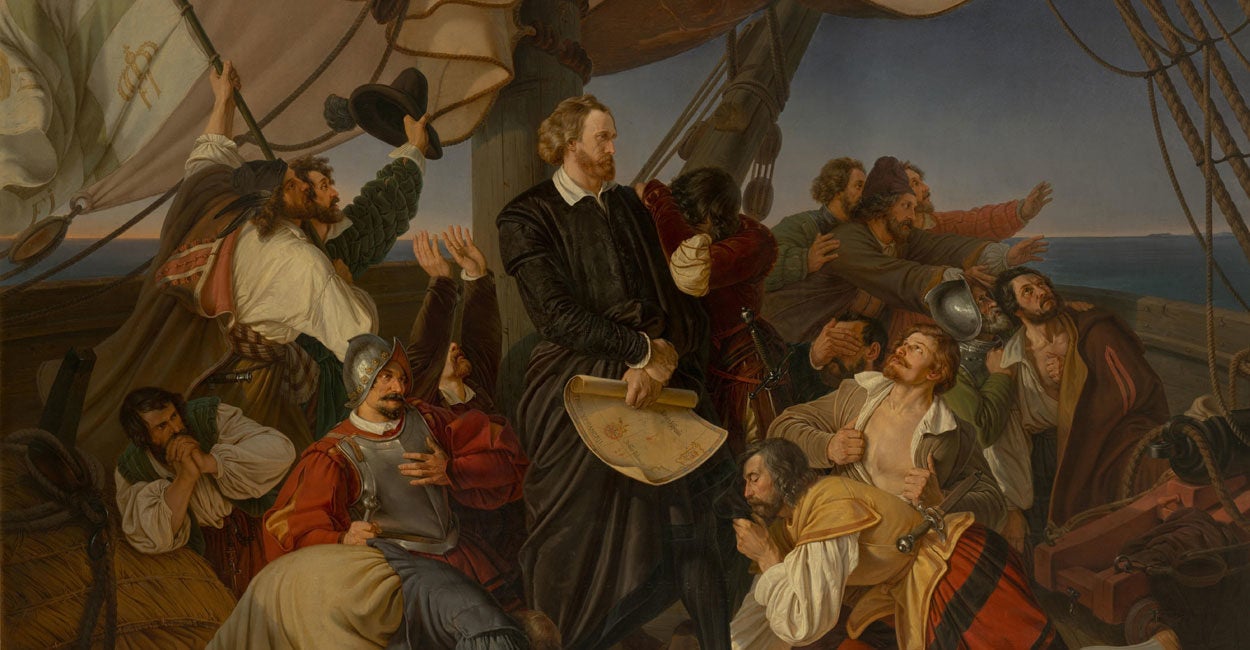 NOTE: this column originally appeared on The Daily Signal, as:

The Truth About Columbus

Is this the last time we can celebrate Columbus Day?

A wave of cities have decided to remove the holiday from the calendar and replace it with “Indigenous Peoples’ Day.”

Christopher Columbus, the Italian explorer credited with discovering America, and his legacy are under attack figuratively and, increasingly, literally.

Several Columbus monuments have been attacked and vandalized around the country. The towering Columbus statue at Columbus Circle in New York City now needs 24-hour guards after Mayor Bill de Blasio put it on the list of a commission to review “offensive” memorials.

The liberal Left continue to push their radical agenda against American values. The good news is there is a solution. Find out more >>

And according to Far Left Watch, a watchdog organization, Antifa and other left-wing groups plan to deface and attack Columbus statues across the country on Columbus Day.

It is unfortunate to see what was once a uniting figure—who represented American courage, optimism, and even immigrants—is suddenly in the crosshairs for destruction. We owe it to Columbus and ourselves to be more respectful of the man who made the existence of our country possible.

A few historians and activists began to attack Columbus’ legacy in the late 20th century. They concocted a new narrative of Columbus as a rapacious pillager and a genocidal maniac.

Far-left historian Howard Zinn, in particular, had a huge impact on changing the minds of a generation of Americans about the Columbus legacy. Zinn not only maligned Columbus, but attacked the larger migration from the Old World to the new that he ushered in.

It wasn’t just Columbus who was a monster, according to Zinn, it was the driving ethos of the civilization that ultimately developed in the wake of his discovery: the United States.

“Behind the English invasion of North America,” Zinn wrote, “behind their massacre of Indians, their deception, their brutality, was that special powerful drive born in civilizations based on private profit.”

The truth is that Columbus set out for the New World thinking he would spread Christianity to regions where it didn’t exist. While Columbus, and certainly his Spanish benefactors, had an interest in the goods and gold he could return from what they thought would be Asia, the explorer’s primary motivation was religious.

“This conviction that God destined him to be an instrument for spreading the faith was far more potent than the desire to win glory, wealth, and worldly honors,” wrote historian Samuel Eliot Morison over a half-century ago.

In fact, as contemporary historian Carol Delaney noted, even the money Columbus sought was primarily dedicated to religious purposes. Delaney said in an interview with the Catholic fraternal organization the Knights of Columbus:

Everybody knows that Columbus was trying to find gold, but they don’t know what the gold was for: to fund a crusade to take Jerusalem back from the Muslims before the end of the world. A lot of people at the time thought that the apocalypse was coming because of all the signs: the plague, famine, earthquakes, and so forth. And it was believed that before the end, Jerusalem had to be back in Christian hands so that Christ could return in judgment.

Columbus critics don’t just stop at accusing him of greed. One of the biggest allegations against him is that he waged a genocidal war and engaged in acts of cruelty against indigenous people in the Americas.

Rather than cruel, Columbus was mostly benign in his interaction with native populations. While deprivations did occur, Columbus was quick to punish those under his command who committed unjust acts against local populations.

“Columbus strictly told the crew not to do things like maraud, or rape, and instead to treat the native people with respect,” Delaney said. “There are many examples in his writings where he gave instructions to this effect. Most of the time when injustices occurred, Columbus wasn’t even there. There were terrible diseases that got communicated to the natives, but he can’t be blamed for that.”

Columbus certainly wasn’t a man without flaws or attitudes that would be unacceptable today.

But even as a man of an earlier age in which violence and cruelty were often the norm between different cultures and people, Columbus did not engage in the savage acts that have been pinned on him.

How Americans Once Viewed Columbus

For much of the 19th and 20th centuries, most Americans were taught about Columbus’ discovery of the New World in school.

“In 1492, Columbus sailed the ocean blue … ” went a popular poem about the Italian explorer who flew under the Spanish flag. At one time, Americans marveled at what seemed like an unbelievably courageous voyage across unknown waters with the limited tools and maps of the 15th century.

It is difficult in the 21st century to imagine what Columbus faced as he crossed the Atlantic in search of what he thought was a route to Asia. The hardship and danger was immense. If things went awry, there would be nothing to save his little flotilla besides hope, prayer, and a little courage.

Most people, even in the 1490s, knew that the Earth was round. However, Columbus made a nevertheless history-altering discovery.

The world was a much bigger place than most had imagined, and though Columbus never personally realized the scope of his discovery, he opened up a new world that would one day become a forefront of human civilization.

This is the man and the history that earlier generations of Americans came to respect and admire.

Unfortunately, Zinn and others’ caricature of Columbus and American civilization has stuck and in an era in which radicals and activists search the country for problematic statues to destroy, Columbus is a prime target.

Much of the modern rhetoric about Columbus mirrors attacks lobbed at him in the 19th century by anti-Catholic and anti-Italian groups like the Ku Klux Klan.

In 1892—the 400th anniversary of the Columbus voyage—President Benjamin Harrison called for a national celebration of Columbus and his achievements. Americans patriotically celebrated Columbus and erected numerous statues in his honor as the country embraced him.

Though American appreciation of Columbus deepened, some groups weren’t pleased.

As the pro-Columbus website The Truth About Columbus points out, the Ku Klux Klan worked to stop Columbus Day celebrations, smash statues, and reverse his growing influence on American culture.

According to The Truth About Columbus, in the 1920s, the Klan “attempted to remove Columbus Day as a state holiday in Oregon,” burned a cross “to disturb a Columbus Day celebration in Pennsylvania,” and successfully “opposed the erection of a statue of Columbus in Richmond, Virginia, only to see the decision to reject the statue reversed.”

Attempts to quash Columbus failed, but they have re-emerged in our own time through the actions of far-left groups who want to see his legacy buried and diminished forever.

This would be a tragic loss for our generation and those of the future.

The bravery and boldness that Columbus displayed in his trek to America have been inherent in the American cultural DNA from the beginning.

We may never have the class, the taste, the sophistication of the Old World upper crust. But what we do have is a reverence for simple virtues of strength, boldness, and a willingness to push the envelope to secure for ourselves a better future than those who’ve come before.

We are a civilization that admires those who push the limits of the frontier, who don’t merely accept what is and want something more. The spirit that drove us west and in modernity, to the moon, is what we celebrate in men like Columbus.

Columbus is justly admired as a brilliant navigator, a fearless man of action, a visionary who opened the eyes of an older world to an entirely new one. Above all, he personifies a view of the world that many see as quintessentially American: not merely optimistic, but scornful of the very notion of despair.

When we have lost these things, when we no longer have the capacity to celebrate men like Columbus, as imperfect as they sometimes were, we will have lost what has made us great, and distinct.

Will Any Candidate in RI Step-Up to Support a Parents-First Educational App...

DAILY SIGNAL: One Woman’s Journey From White House to Launching a Makeup Brand...
Scroll to top
YOUR CART
Subtotal:
$0.00
Subscribe to Our Weekly Newsletter