GIRL, GONE: A “Trans Teen” Was Removed From Her Parent’s Care. Then She Was Sexually Abused.

This story by Genevieve Gluck , originally appeared on Reduxx.info on October 26, 2022 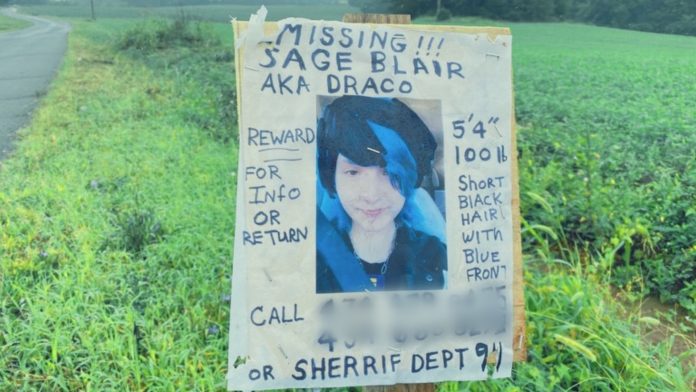 Michele and Roger Blair first reported the disappearance of their teen daughter, Sage Lily Blair, to the Appomattox, Virginia Sheriff’s Office on August 25, 2021.

Sage, 14 years old at the time, had run away from home after experiencing intense bullying at her school stemming from a newly-adopted transgender identity. Sage, a female, had begun identifying as a boy.

Michele and Roger would soon discover that the public high school Sage had attended was secretly encouraging her “social transition,” and had been deliberately withholding information from her family. Sage had begun calling herself “Draco” while at school, and using masculine pronouns.

Sage’s parents first became aware of their daughter’s decision to identify as transgender when a teacher notified them of an incident report involving sexual harassment in the boy’s washroom and on the bus. Sage had tried to use the boy’s washroom as part of her “social transition,” and had faced a rape threat as a result.

But, according to her parents, Sage’s insistence she was transgender appeared to come from a dark place.

Michele, Sage’s mother, told Reduxx that she believes that her daughter was groomed online by adults who used the concept of a gender identity to get close to her, promising that they would be her new “family.” She says Sage had met the adults, who were posing as children, via Instagram and Snapchat.

Just over a week after running away from home, Sage was located by the FBI.

She had been sexually exploited by an adult man she had met over social media and who believed her to be 16. A Virginia man had picked her up and transported her to Washington, DC. When she arrived in DC, the two men took her to Maryland, telling her she’d be going to stay with their family. Upon arrival, Sage was sexually abused repeatedly.

On September 2, 2021, Sage was sent to a hospital for a rape exam, a process which, according to Michele, went well into the night and lasted until the early hours of the morning. The FBI instructed her parents to pick her up the following day at the Waxter Children’s Center, a girls’ detention facility in Laurel, Maryland.

But when Michele and Roger arrived at the detention center where their daughter was being held, they were told they would not be allowed to see their child.

“They [the state authorities] would not even let me talk, hug, or see her the day after she went through the rape exam,” Michele told Reduxx, and added that the experience was, “heartbreaking, to say the least.”

Instead, they were required to appear in court that same afternoon, as they were being investigated for child abuse over alleged “misgendering.”

Michele and Roger would later discover that the investigation had been requested by the public defender, who had contacted two school counselors to testify against them. The counselors would argue that Sage should not be returned to her home due to a lack of a sufficiently “gender affirming” environment.

“Upon my arrival I was told my granddaughter would not be allowed to return to Virginia,” Michele had stated in May. “Sage was now being represented by a juvenile attorney and my husband and I were going to be investigated for ‘abuse’ because my husband and I called her Sage and not Draco.”

Michele provided Reduxx with a number of documents related to the ordeal, some of which attempt to paint their lack of “gender affirmation” as child abuse.

“Sage now identified as a boy and the judge demanded we use the ‘he/him’ pronouns and call her Draco. Sage was being represented by an attorney whose actions from the beginning were unethical and unprofessional,” Michele explained.

Michele believes the juvenile defense attorney representing Sage in the abuse claim had convinced her daughter to assert that she had been mistreated by her parents. Sage would later tell her mother that the lawyer had coached her to say that her parents were abusive because they wouldn’t accept her as a transgender boy.

Pending the outcome of the investigation, Sage was initially held in juvenile detention. During a second hearing, Michele pleaded for her daughter to be placed in a more comfortable environment. Instead, the state transferred Sage to the boy’s ward of a Children’s Home in Maryland on September 6.

The only girl in a male unit, Sage was again sexually abused by boys in the Children’s Home and was relocated to a private room within the boys’ section.

It would take more than two months, and over a dozen court appointments, before Michele and Roger Blair would be cleared of the abuse allegations against them. The Blairs provided Reduxx with multiple documents substantiating that no abuse or abusive intent had been determined.

Despite granting Michele and Roger’s petition for custody, the state of Maryland did not immediately relinquish parental rights to Sage’s family.

Instead, the now 15-year-old girl, who had begun calling herself “Justin” instead of “Draco,” was sent to public school in Maryland and was required to wear a GPS tracking device.

On November 9, a Maryland judge finally ruled for the state to release Sage back to her family in Virginia. However, this decision was immediately appealed by the juvenile attorney representing the girl for the state who wanted Sage placed in a foster home, again on the basis of protecting her “gender identity,” bolstered by a claim of ostensibly abusive “misgendering.”

“Sage had been sent by another predator from Maryland to Dallas, Texas,” Michele recounted. “This man held her there in a locked room and used her for pornography, sold her body for money, starved her, beat her, and drugged her.”

Local authorities, the National Center for Missing and Exploited Children (NCMEC), and the FBI were all notified that the teen was missing. However, Michele said the authorities in Baltimore refused to approve a request from Texas police to track Sage’s phone on the basis that she wasn’t linked with any crime.

Ultimately, it was a tip from one of Sage’s Instagram friends led to her recovery. Using a photo sent to him by the teen, a Texas Marshall was able to ascertain her whereabouts.

The Blairs were finally reunited with Sage in Dallas on January 24, 2022.

Little more than two weeks later, Michele took her daughter to North Springs Behavioral Healthcare Center, a facility that specializes in the treatment of psychological distress and trauma in children and teens. Michele says that while an inpatient at the Center, counselors continued to try and “affirm” Sage’s “gender” despite the fact she said she no longer identified as a boy. Michele made 8-hour drives to visit her daughter every Saturday, though was only allowed to be with her for 2 hours per week.

On July 25, Sage was discharged from the rehabilitation clinic and at long last returned home.

Sage no longer identifies as transgender, and is to be happy and healthy with her family. Michele proudly showed Reduxx a photo of Sage having her ears pierced at her local mall for her birthday last week.

“Sage is the apple of my eye. It has been a rollercoaster, but she is home,” Michele says. “What happened to her hasn’t really changed our love, but it has changed our relationship because we are getting to know each other on a different level because of the trauma.”

Michele says Sage had tried going to school, but the endeavor was too stressful.

“She loves running. Running is her coping mechanism. She had joined cross-country and she loved it, but, sadly, when she was running the trail she’d sometimes see men and that was too much of a trigger for her. So she quit.” Her last day of attempting to go to school, Michele says Sage couldn’t get out of the car — so she took her daughter home.

Michele explained to Reduxx that the county is processing paperwork in order to get Sage a home tutor so she can continue her studies in 10th grade.

Getting emotional, Michele describes that Sage has been struggling with her mental health.

“She has panic attacks and nightmares about this man. She struggles to breathe. In the middle of the night she will crawl into bed with me, which she hasn’t done since she was a little girl. It has been really hard. But she is strong.”

A 37-year-old man has been arrested and detained in Baltimore in relation to the case of Sage’s sexual abuse. According to Michele, Kenneth Edward Fisher is one of three predators who are awaiting a hearing on charges related to child sex trafficking. The names of the other two men have not yet been released.

As other youth were involved in the case, publicly-available information has been limited in order to protect the minor victims.

Michele and Sage are set to travel to Baltimore next week for the beginning of the trial. Lawyers with the Office of the State’s Attorney for Baltimore City and the Rebuild, Overcome, and Rise (ROAR) Center at University of Maryland are both involved in the case.

“The lawyers said we could [appear] over Zoom, but it was Sage who actually said she wanted to go. She said ‘I feel like I have to go.’ I asked her if she was sure, and she told me ‘I don’t want it to happen to any other kids, what happened to me.’”

Michele is hoping that the trial will be a turning point in Sage’s healing. She knows the road to recovery will be a long one, but has optimism that her daughter will make it through.

“I am an adult and can barely handle this anxiety, let alone a child. But we are getting through it, by the grace of God … It’s going to be okay. She’s home. I love her. And life goes on, one day at a time.”