April appears to be the time for setting the tone for forthcoming elections.

As part of that effort, RIFuture’s Bob Plain puts forward the proposition that “many of the Democrats in the General Assembly are more closely aligned with [conservatives’] own ideology than that of the party’s typical platform.”  It is not surprising that Plain offers little detail about his understanding of conservative ideology or of the “typical” Democrat platform.  It’s also debatable that his core bit of evidence, present or past affiliation with the American Legislative Exchange Council (ALEC), really provides evidence of his claim, considering that even Plain is forced to admit that the list includes “some of the state’s most liberal legislators.”

Specifics aside, there’s nothing new to this argument.  Precisely this time of year during the 2010 campaign cycle, prominent Rhode Island left-labor figure Bob Walsh, Executive Director of the National Education Association – Rhode Island (NEA-RI), made a similar assertion:

Robert Walsh is executive director of the National Education Association in Rhode Island and another prominent Democratic activist. He says unions and liberal Democrats don’t deserve the blame for Rhode Island’s woes.

“You want to give us the keys to the kingdom for a while, we’ll show you what good progressive taxation and business development policies can do to turn the state around,” Walsh says. “We’re, I suppose, a useful target for the people on the other side of the political spectrum, but the gravity in the legislature’s clearly in the center.”

Still, the theme has been bouncing around Twitter for about a week, and it’s been picked up by reporters spanning from the far-left Providence Phoenix to the establishment-left Rhode Island Public Radio, so it’s worth considering.  Is there any way objectively to assess whether, at the state level, Rhode Island is as liberal as is often thought or is really a red state disguised in a Democrat costume?

As it happens, a statistical study released in August, by University of Chicago Professor Boris Shor and Princeton University Professor Nolan McCarty, provides a framework in which to answer the question.  Their findings, apart from giving some structure beyond politically motivated hints and allusions, may also focus attention on a quality of Rhode Island governance that both the left and the right find objectionable.

Figure 7 of the document consolidates the results into graphical form.  The boxes are plotted on a left (liberal) to right (conservative) axis, and the states are in order from the most conservative at the top to the most liberal at the bottom.  The vertical lines spanning all states to the left and right of zero are the median ideological scores of Congressional Democrats and Republicans, respectively. 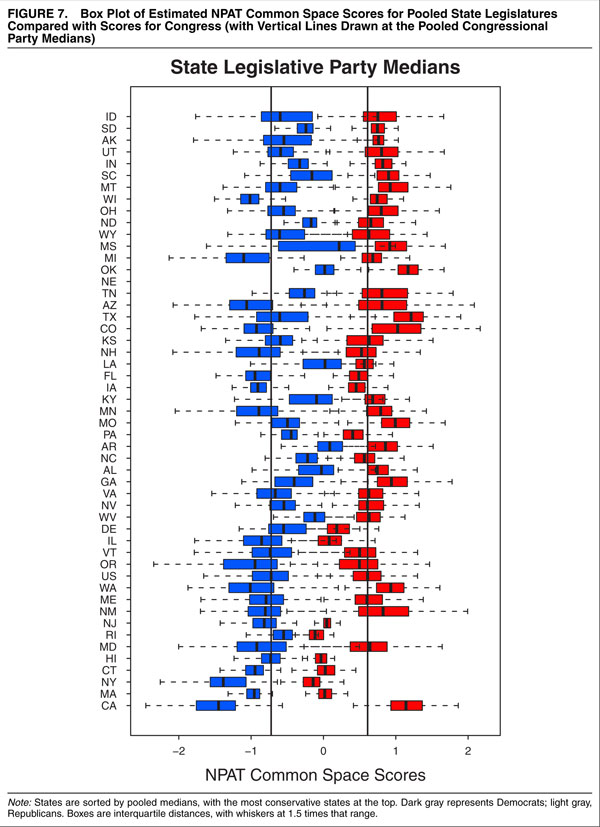 Two observations are immediately possible and are emphasized in other figures from the report.  First, Rhode Island has the seventh most liberal state legislature in the country.  Second, the RI General Assembly is the single most ideologically narrow legislative body in the United States.

Anecdotes and the impressions of left-wing activists aside, Rhode Island’s legislature can clearly not be considered conservative in any terms, and its Democrats can certainly not be accused of being out of step with their peers in other states.

The variable that I’ve been seeking to confirm with Professor Shor is that Rhode Island’s narrowness may have something to do with the strong hand of the two chambers’ leadership.  As I understand the methodology, the researchers plot legislators who responded to the Project Vote Smart National Political Awareness Test (NPAT) along the ideological line.  They then determine the views of legislators in a state who did not respond to the survey by their likelihood to vote with those who did.

In other words, very liberal and very conservative respondents may not be adequately represented if the range of issues on which a vote actually comes to the floor is relatively small.  That could be ideological, in that votes don’t come up that are sufficiently controversial that the extremes can’t vote with the moderates.  It surely also has to do with the aversion of legislative leaders to permit votes that may not go their way.

Whatever the case, a general rule of thumb appears to be that those who desire more-liberal behavior from their state-level Democrats ought to hope for a larger and more-conservative group on the other side of the aisle, thus allowing Democrats to offset them.  And everybody ought to prefer a system that moves power from the hands of leadership to the hands of the people’s direct representatives.