According to a news release from the Rhode Island Department of Labor and Training (DLT),  there are actually 800 fewer people employed in Rhode Island than previously thought.  But that’s a good thing… because even more people gave up looking for work than we thought.  Recovery!

You see, a smaller number of people looking for work means fewer people are “unemployed.”  When you add employed people and those who say that they are unemployed and looking for work, you get the state’s “labor force.”  The “unemployment rate” is the percentage of the labor force claiming to be unemployed, and the revisions brought that rate down 0.3 percentage points, to less than 10.0% for the first time since early 2009.

Not to be a downer, but according to the U.S. Bureau of Labor Statistics, the revisions helped Nevada even more than they helped Rhode Island.  That means that we’re no longer tied for last; we’re dead last.

What’s worse, putting the prior results and the revised results on a line graph gives some important context to these statements, and it arguably makes Bramson’s lead factually inaccurate. The solid lines are the original numbers, and the dotted lines are the revised numbers: 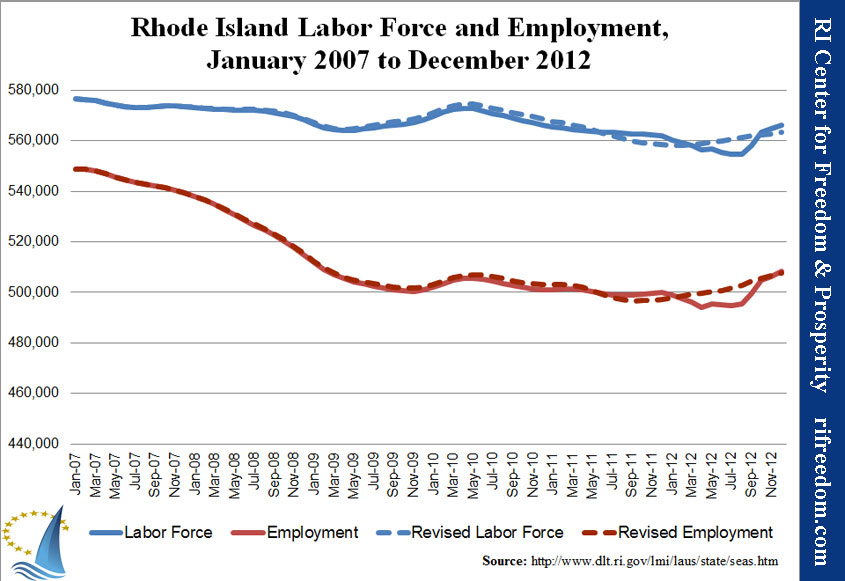 So, to review: In the run-up to the recent election, Rhode Island saw an unprecedented jump in employment and labor force. I pointed out, at the time, that the Ocean State was leading the country in employment growth, and the DLT announced that the state had never seen such a jump.  After the election, the growth rate moderated. Meanwhile, the Bureau of Labor Statistics has delayed release of its January employment numbers, because it is changing its methodology, which will make it impossible to compare numbers going forward precisely with historical numbers.

Whatever the reliability of the numbers then, now, or to come, one needn’t be constitutionally skeptical to question a statistical methodology that creates good news out of downward revisions.