Employment results reported for Rhode Island by the federal Bureau of Labor Statistics (BLS) continued to show an upward swing through December.  With unemployment hovering around 3.5%, the Ocean State has seen continual increases in employment and labor force since June, but a full recovery of employment since the Great Recession continues to evade Rhode Island.

The following chart shows those two data sets since the recession began in Rhode Island.  Reviewing the chart, readers should consider the historical experience of BLS’s annual revisions.  When those numbers are released in the coming weeks, these lines may be changed from a story of complete stagnation followed by a boom in order to show just the continual, slow growth that has characterized the economy under Democrat Governor Gina Raimondo. The following chart shows the percentage of employment and labor force versus its peak levels for Rhode Island and its two neighboring states, Connecticut and Massachusetts.  The Ocean State has long been the lagging member of Southern New England, but its upward trend has been stronger over the past several months.  That said, the moderated line of regional powerhouse Massachusetts could suggest a downward revision is pending for Rhode Island. Despite the upswing, Rhode Island remains one of just a handful of states that have not yet matched their levels of pre-recession employment.  The Ocean State has been below that line for 13 years. 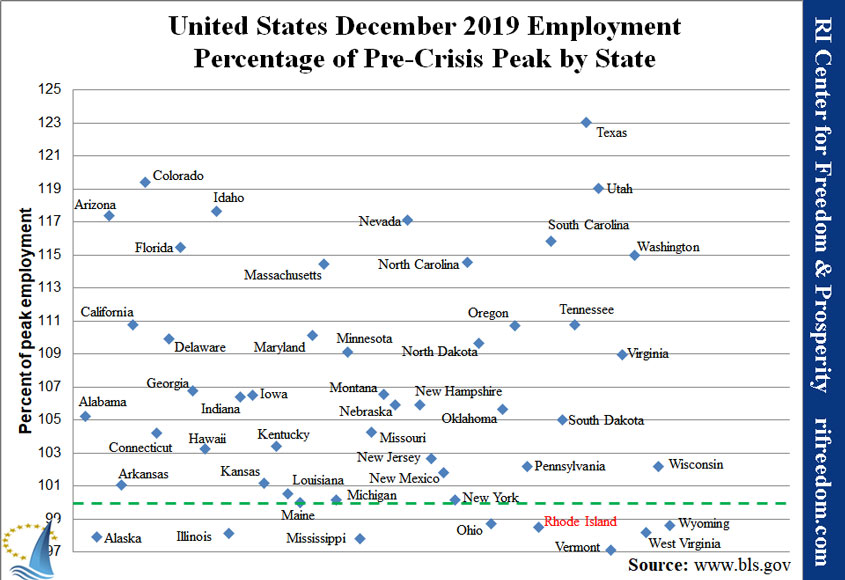 The next chart shows the number of actual jobs counted in Rhode Island (light area) versus the number of Rhode Islanders who say they are employed, which would add those working outside of the state as well as those who work for themselves or as contractors.  On the other hand, the jobs number counts Rhode Islanders who hold multiple jobs multiple times and also includes out-of-state residents who work for Rhode Island companies.  The number of jobs has surpassed its peak level, but the growth has been achingly slow, including during the time that employment numbers appear to be booming. The RI Center for Freedom & Prosperity’s Jobs & Opportunity Index (JOI) should also temper enthusiasm.  Rhode Island remains mired in 47th place and has not had a better rank than 47th since 2011.  Meanwhile, New Hampshire remains the first in the country. Casimiro and Vella-Wilkinson on Pending Legislation