Employment results for Rhode Island in October were not encouraging, to say the least, although this is the third month in a row for which we’ve had to say it.  Once again, the unemployment rate fell one-tenth of a percent, to 3.8%, and once again the reason was that Rhode Islanders stopped even looking for work.  Whereas employment only increased by a measly estimate of five people, 742 people stopped looking for work, on a net basis. For further evidence that the unemployment rate, as a measure, offers an undue opportunity for spin among those who want to promote an RI economy that isn’t reality, look to what it would be doing if we hold the number of people working or looking for work (the labor force) steady since the start of the recession.  The rate would be stuck at a steady 6.1%. This is going on while Massachusetts continues to push the upper boundary of this monthly chart, and even Connecticut is showing signs of employment health. The trend also means that Rhode Island remains agonizingly and stubbornly below the line at which it will have regained 100% of its lost employment, even after 12 years. One area of just a little bit of light can be found in the state’s job numbers.  From September to October, the number of jobs on offer from Rhode Island companies increased by 500.  However, in light of the employment results and evidence of increasing numbers of Rhode Islanders who are unable to find anything but part-time work, the light is only a slightly different shade. 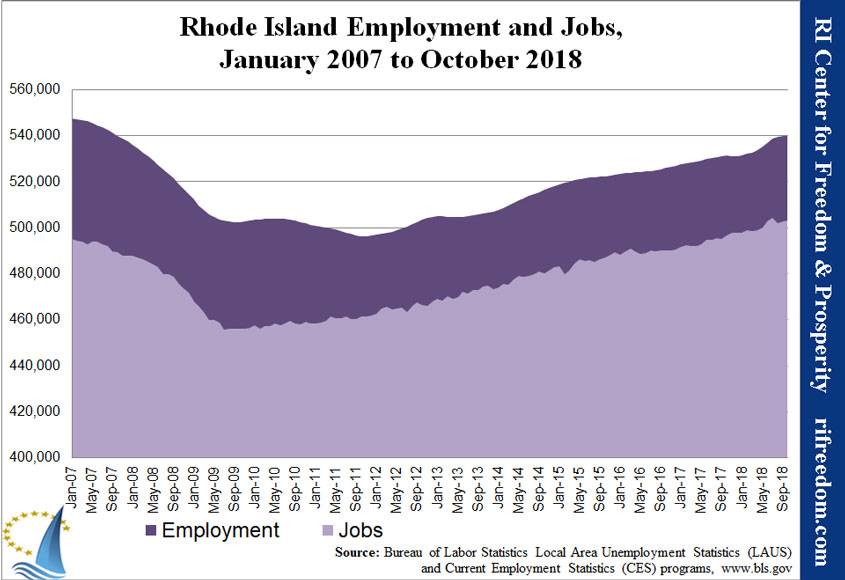 A Little Sleight of Hand from Gorbea

No Place for Young Men
Scroll to top
YOUR CART
Subtotal:
$0.00
Subscribe to Our Weekly Newsletter